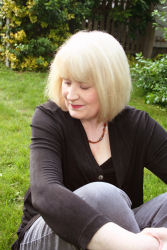 Alice N. Persons lives in Westbrook, Maine. Her poems have been nominated for a Pushcart Prize twice, in 2004 and in November 2009. She teaches English courses at SMCC sometimes. A Maine resident since 1983, she volunteers for animal welfare organizations and also serves on the board of Port Veritas, a spoken word collective in Portland. She has four cats and a dog and freely admits that this is a little over the top.

Alice’s poems have been published in various journals, including Animus, Off the Coast, Aurorean, and The Orange Room Review. Seven of her poems have been featured on Garrison Keillor’s The Writer’s Almanac on NPR. In April 2011 she also had two poems in Garrison Keillor’s third poetry anthology from The Writer’s Almanac, GOOD POEMS AMERICAN PLACES (Viking).

Be Careful What You Wish For, chapbook, Fall 2003

Don’t Be a Stranger, June 2007. ( Sheltering Pines Press of Kennebunk, Maine. It is available from their website, or email Alice at moonpiepress (at) yahoo (dot) com